Where Did the Kansas Jayhawk Logo Come From? - Framewoods Gallery 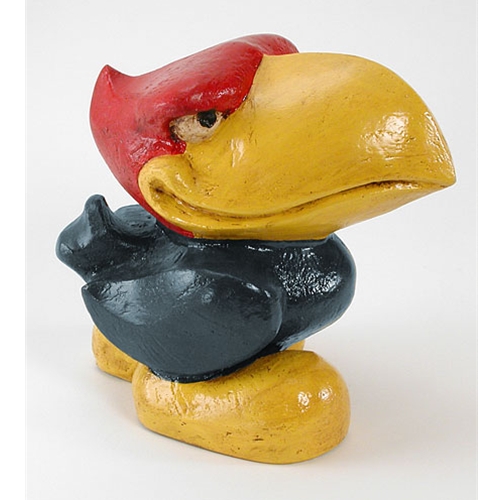 Framewoods Gallery in Lawrence, Kansas, sells a lot of Kansas University Jayhawks memorabilia. Is there such a thing as a real bird named a jayhawk? No, it’s a mythical bird and it’s the mascot for the University of Kansas, so it’s pretty much the mythical bird of the state of Kansas at this point in time!

How did the Jayhawk logo/mascot come about? Way back when, in the 1800s, there was a Kansas-Missouri border war which continued into the Civil War. At the time, a group of Californians were passing through Kansas and called themselves Jayhawkers. The name was thought to come from a combination of blue jays and hawks, with the noisy nature of the blue jays combining with the predatory habits of hawks. In the 1850s, the nickname stuck and anyone from Kansas was referred to as a Jayhawker.

Now about that war… the Kansas-Missouri border war involved tension between the anti-slavery Jayhawkers of Kansas and the pro-slavery Bushwhackers of Missouri. Interestingly, Jayhawkers, for a time, were associated with stealing, and the term was used to describe marauders, robbers and thieves! You can read whole books about this time period in Kansas history to get a good perspective of what occurred. Suffice it to say that after the Civil War, the name Jayhawks ended up referring to people who helped make Kansas a “Free-State.”

Fast forward to 1886. That was the year the first Jayhawk mythical bird appeared in a cheer during a University of Kansas athletic event. Soon it became the school’s mascot.

Today, Kansas natives are known as Jayhawks. And the University of Kansas still uses the bird as its mascot!